A Magical Half-Century Partnership - Classical KDFC
Support the Music You Love
This stream only exists thanks to listener support. Consider making a gift of any amount to keep it coming. In a rare joint appearance, composer John Williams and director Steven Spielberg shared the stage recently at the Writer’s Guild Theater in Beverly Hills, to reminisce about their 50 years of cinematic collaborations. Hosted by the eminent film music journalist Jon Burlingame and presented by The American Cinematheque, the evening featured clips and conversations from a handful of their collaborations over the years, starting when Williams agreed to compose music for the filmmaker’s feature debut, the 1974 chase movie The Sugarland Express and ending with their most recent collaboration, Spielberg’s autobiographical drama, The Fabelmans. Classical California’s Brian Lauritzen and Brisa Siegel attended the event and afterwards sat down to weigh in on the experience.

Brian: We don’t get these very often here in Hollywood, but this was a real “pinch-me” moment. After Williams recounted his initial meeting with Spielberg at a restaurant in Beverly Hills (“He looked like he was 17…I thought he was the director’s assistant”), the two of them talked Jaws, a film with one of the simplest, and yet, most iconic main themes. What struck me most was Williams’s explanation that these two notes could work at any tempo at any volume, and however it was deployed, it would still serve the drama on screen.

Brisa: And I love the metaphor he used to describe that versatility! He explained how music has a “gas pedal,” and as a composer for films you have to constantly adjust the music’s tempo to what you see. Consequently, Williams says he still looks back on E.T. with puzzlement. “The speed of the bicycles that lift up over the moon…that’s always bothered me a little bit, particularly when I’m conducting it,” he said. “I’m thinking to myself: What is the speed of ‘escape velocity’? How fast do you have to be going to be able to lift OFF the ground? Maybe there’s a physicist here who’ll tell, but I never knew what that was!” Williams chuckled and said he’s even asked NASA officials, but never received a satisfying answer. Spielberg, listening with a grin and an eye roll, finally gave him his answer: It’s just alien magic. “Well, uh…E.T. did it!” he said, as Williams and the audience both laughed. “Where he comes from, there is no escape velocity.”

Brian: Williams also brought up something I’ve been thinking about a lot lately: the fact that, as a society, we are nearing the end of an era where those who lived through World War II can tell us about their experiences firsthand. Williams was nine years old when Pearl Harbor was bombed and 13 when the war ended in 1945. He said his experience of living through that time of global trauma was not only a coming-of-age moment for him, but it forever heightened the importance for him of writing music for films which tell stories from World War II. Hence, his powerful and moving scores for Schindler’s List, Saving Private Ryan, and others. For me, Williams’ comments on this subject are a reminder that we would do well to listen to those who have something – anything – to say about that era in world history.

Brisa: And in that, the two reminisced about Schindler’s List. Williams described the day he saw the film for the first time. “Steven showed me the film, after which we were to have our usual meeting that discussed the music. The lights went up and the film was over, and I couldn’t breathe,” Williams recalls. “I said, ‘Steven, excuse me, I just want to go outside to get a little air.’ I walked around for five minutes, and came back to start our meeting, and I said to him, with no deprecation or anything, this was only to be realistic, I said: ‘Steven, this is a great, great film. And you need a better composer than I am to do this score.’ And he said, ‘I know…but they’re all dead!’” Maybe because it was the most excruciating sequence of the night, it inspired the audience’s biggest laughter – a release from the scene’s agony. The story was so indicative of their relationship, and perhaps their secret to a successful 50-year-friendship: it’s that perfect balance of professional respect and admiration, plus an almost sibling-like camaraderie.

Brian: I totally agree – and you can feel it when you see them interact! I adore the score for Close Encounters, so any time I get to hear Williams talk about it, I’m on the edge of my seat! He and Spielberg reminded us all that this is a film about connecting with others, and that music can be a means to initiate conversation. Williams said that famous five-note theme was in two parts: a question and an answer.

Brisa: I loved that too, Brian. I also loved that it kind of gave us insight on how to listen to music. What should we be listening for? How is the music speaking to us? What sounds form questions? Which ones form answers? And which sounds form our emotions? The final moment that struck me was their discussion of Jurassic Park. Moderator Jon Burlingame showed the scene when the characters see the enormous dinosaurs for the first time. Spielberg recalled Williams wanting to use the music to convey majesty. Spielberg said,“When he first saw the picture, he talked about the nobility of these animals. We never called them monsters, we never called them dinosaurs. We called them animals.” And to me, this spoke to who John Williams is as a human: his sensitivity, and his emotional understanding. His ability to look beyond what could have been the characters’ fear, but instead find wonder, and conjure it through sound.

The evening started with a clip from the first collaboration between Spielberg and Williams – Sugarland Express – and concluded with a moment from their most recent film together, The Fablemans. Even though a half-century separates the two films and the stories they tell couldn’t be more different, there was a symmetry that was palpable in the room. We all thought we had seen a brief but complete retrospective of one of the most special collaborations in film and music history.

But then John Williams decided to make some news.

“You don’t retire from music,” Williams said. Steven Spielberg, he said, is a man who you don’t say “no” to and, if he calls again for another score, “I suppose I’ll say yes.”

After all the conversation, stories, insights, and good-natured ribbing between Spielberg and Williams were finished, Williams paused and reflected a bit on his life experiences up to this point and the fact that he was just entering his 10th decade on the planet. He referenced the joy of aging and how you appreciate the beauty of life and planet earth more with each passing year. “You don’t realize until you’re in your 90s,” Williams said, “that the most beautiful thing on earth are these little Peruvian butterflies.” He said he’d never be able to match that kind of beauty in any of the music he would write, but the pursuit of it keeps him going. Even today. And, yes, tomorrow. 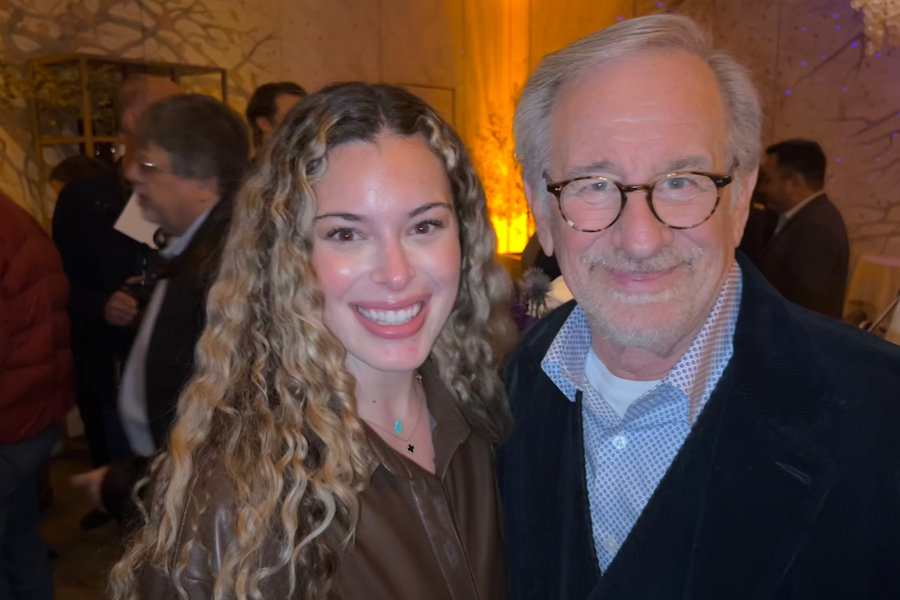 Host and content creator Brisa Siegel uses her voice to encourage music lovers to connect more deeply to themselves and their experiences by sharing classical music. She owes her love of classical music and storytelling to her dynamic bicultural family of composers, conductors, dancers, and trailblazers.